5 Years ago, I celebrated 25th anniversary of the first photo that I ever sold and the publication of that photo was also the first time I saw a photo of my hand in a magazine.
It was a photo I took at a punk concert and it is a photographical genre I kept exploring since. To celebrate the anniversary, I put together my best shots of these 25 years in a book with the title 'Loud'. 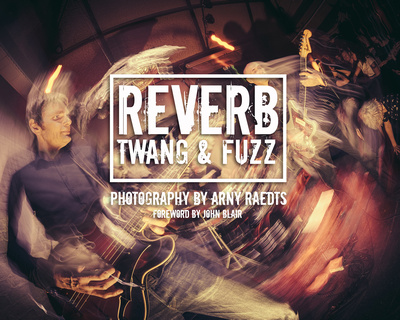 At that time, I never thought I would do a lot of music photo in the future. I was to busy shooting for travel magazines, doing reportage work and just tried to have fun with photography. It wasn't my first source of income.

But two years ago everything changed. I picked up my guitar again and even started a new band. I refound my love for music, as a musician but also as a photographer. I think I shot more concerts the past two years than I did the 10 years before.

So maybe it is time for a new book, a selection of the best concert shots of the past 5 years. And to make the selection easier, I narrowed it down to three musical genres: surf, rockabilly & garage punk.

This book is a visual celebration of these three musical genres that stayed mostly in the underground for fifty years: surf, rockabilly & garagepunk.
Each genre had it's hits and legendary artist (Dick Dale, Link Wray, Sonics, Elvis, Stray Cats to name a few) but most of the bands are popular in a select, small scene. A scene that keeps growing as the subculture keeps surfacing more and more in popular culture.

Since I was a teenager, this was the music I listend to, and still do. I played in surf and garage punk bands and shot several bands for music magazines. I can't live without crashing spring reverbs, screeching fuzz guitars and loud drums!

Last year I visited the Surfer Joe Summer Festival in Livorno, Italy, where I shook hands with some of the nicest people in the international surf scene. With some of them I kept in touch. Others commented on my photo's on forums like SG101 or on Facebook. Some even ordered a couple of my photo's through my website. One of them was John Blair. Mr. Blair is a music historian that wrote several books, some of them are considered standards. But he is mostly known for being the force behind the first revival of surfmusic in the late 70's with his band Jon & the Nightriders. I was truly honored that he liked my photo's and I got goosebumps what I got a mail from Brian of SG101. He visited John at home and mailed me that John had my pictures framed on his wall. But blushed like a little girl, when I got a mail from John on my birthday last december. He sent me the nicest birthdaypresent; a foreword for my new book!